We have released the SeisComP3 in the new version Jakarta-2018.327. For that release many new and valuable features have been added including a major rework of the phase picker in scolv and the new ability to monitor waveform archives for the first time. Other modules have received optimizations or documentations to increase their usability. The database schema upgrades to version 0.11. Very important: ML has been corrected.

When installing a new SeisComP3 release upgrading the database may be required. The database version will be tested and the required actions will be shown when executing

or when pressing the Update Configuration button in scconfig. An upgrade from version 2017.334 will give:

The shown migration scripts can be used directly with the mysql command:

Using the migration scripts provides a more user friendly way than copying the lines of mysql code from the changelog. In later versions we might add the option to automatically run the migrations.

The new data availability data model objects have been introduced. Now waveform properties such as gaps, overlaps or changes in quality parameters like sampling rate can for the first time be stored in the database.

The picker window in scolv - the main graphical analyst tool has received an updated layout show waveforms more efficiently and with more information: 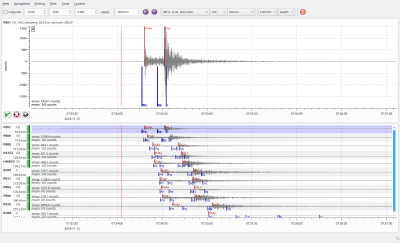 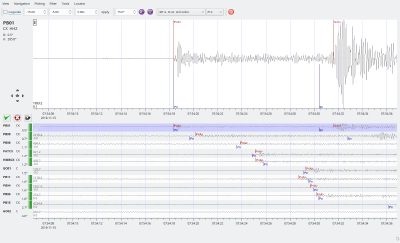 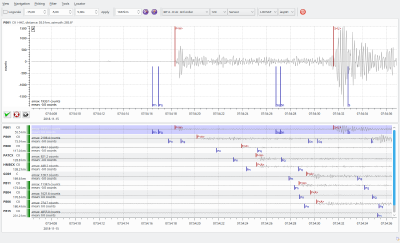 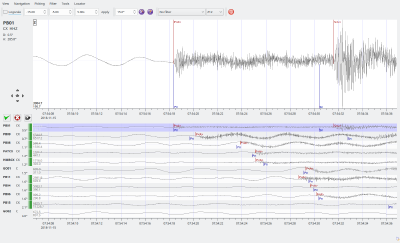 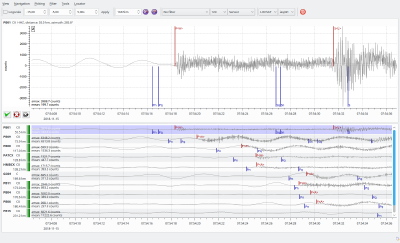 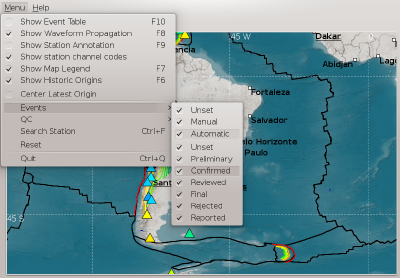 In the map view, scmv, you can now select or unselect the event type to show on maps.

The positions of maps are now configurable in the global configuration. 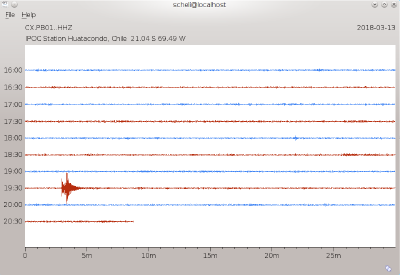 We have brought scheli alive again by providing a detailed documentation and examples on how to automatically save PNG image. Such PNG image can, e.g., be uploaded to web sites for show instantaneous stations views. Even text overlays are now possible by configuration. 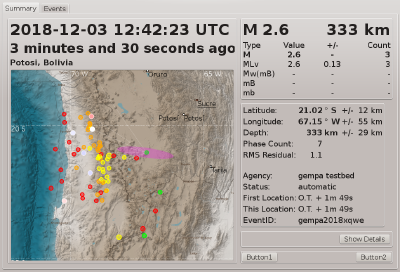 FDSNWS provides the meta data for periods where data are available.

In scesv customized buttons can now be configured to trigger map export. The maps can be used in user-defined scripts which are linked to the buttons. Such script allow report generation, sending of information and much more operators need to in their daily routine work. It can be configured for both optional scripts:

The generated filename will be appended to the parameter list of each script call. 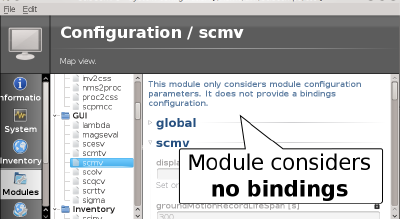 The module configurations in scconfig now show if bindings can be configured or not.

scconfig is now showing whether or not a module also provides bindings allowing operators to quickly set up the module and to make the right configurations. 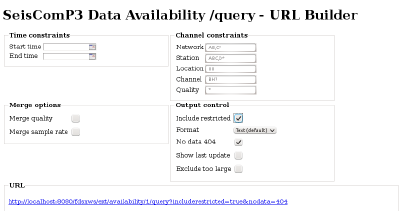 FDSNWS provides the data availability feature with the URL builder.

The fdsnws now supports the new data availability object. The user can request the periods of equal data availability and list all gaps, overlaps or changes in meta data such as sampling rates. For this we have developed a new URL builder: activate the availability feature by configuration and navigate to availability in the Web browser after loading the FDSNWS implementation. 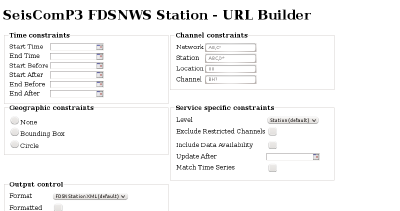 FDSNWS provides the meta data for periods where data are available.

To support this new availability feature in even more depth, the station builder can now be commanded to provide the meta data only for periods where data are available.

scautoloc has received new attention. It now supports checking the origin depth before sending it to the SeisComP3. A few optimizations remove issues related to memory leakage.

By adding more phases to the standard phase tables, teleseismic phases are now better supported and can be used for locating earthquakes or simply for showing in the scolv picker window.

In order to make playback and waveform collection for events even easier, scevtstreams now allows more wildcards. It also provides a new option for generating the input request lines for our capstool module which comes with CAPS.

Here we have applied some fixes to correctly convert the data logger information.