Plate rupturing or landslide? What caused the tsunami after the M7.5 earthquake N of Palu, Indonesia?

The large tsunami locally observed in the city of Palu, Indonesia on 28 September was triggered after the M7.5 earthquake to the North of the city but the large wave heights seem to be generated by a non-tectonic source.

No doubt, this event was large and devastating and the tsunami waves following the event were high and destructive near the city of Palu. However, was the M7.5 earthquake alone enough to generate such a tsunami? To tackle this question we have analyzed the event in more detail using SeisComP and many of our gempa modules for real-time and interactive analysis.

The earthquake near Palu, Sulawesi (Indonesia) on September 28, 2018 with a magnitude M7.5 was caused by a shallow strike-slip faulting. The aftershocks from within 4 days after the M7.5 event extent from a few kilometers to the North of the epicenter over about 200 km to the South. The main event must have therefore had a very large lateral extent on a N-S striking fault. The rupture is aligned with known existing tectonic faults as shown on the map.

The focal mechanism derived by first motion analysis as well as moment tensor inversion and an aftershock analysis indicate the left-lateral North-South striking fault with a rupture plane dipping steeply to the East. The earthquake happened within the Molucca Sea microplate, which is surrounded by a complex tectonic situation with scattered microplates. The rupture size based on aftershock analysis of the first few hours is roughly 100x20 km but about 200x20 km based on the aftershocks within 4 days (surface rupture length x surface rupture width). The rupture area is mainly located South of the hypocenter ending with the South edge at the city of Palu. While the main activity is at first in the center of the rupture area, it is later moving to the North and South edges of the rupture area.

In this case most of the rupture area was located on land. Strike slip earthquakes of this size typically don’t have enough vertical uplift to cause a tsunami. Thus, the location of the hypocenter, the centroid and almost the entire rupture together with the strike-slip character of the earthquake mechanism make the generation of a large tsunami by earthquake rupturing unlikely. The tsunami was therefore probably caused by a secondary mechanism such as a land slide triggered by the earthquake.

Some more details can be found below.

As we are helping BMKG in Indonesia to maintain their real-time system for tsunami early warning we are constantly monitoring the real-time performance of SeisComP and all our gempa modules on our testbed system. Our system has automatically detected and located the mainshock within only 2'8'' after the start of the rupture. Tens of aftershocks were located within 4 days. The first automatic source mechanism was available after 14'. It shows clear strike-slip on an almost vertical fault at shallow depth. The centroid of the event as derived from automatic Centroid Moment Tensor inversion is located about 50 km south of the epicenter to the North of Palu. 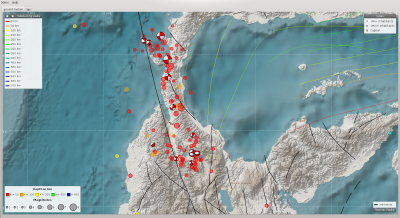 The mainshock event lies in the centre of a large aftershock cloud stretching over more than 200 km in N-S direction. 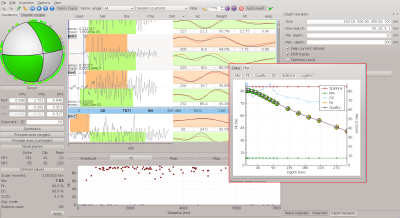 We have used LAMBDA, our brand-new gempa module for array analysis in SeisComP3 to determine the duration of the earthquake rupture. In LAMBDA we could detect the P and S phases arriving at the Palm Springs array in Australia. The total duration of rupture is about 100 s as found from the duration of the direct P waves. 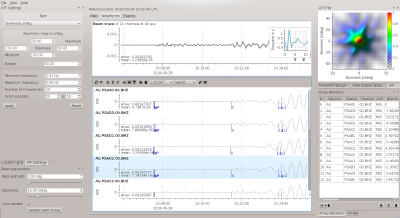 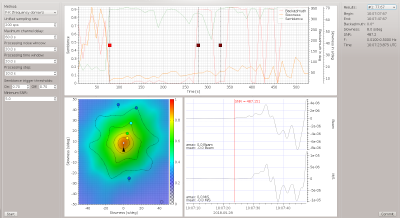 TOAST simulates tsunami wave heights based on earthquake parameters and other observations such as from tide gauges, wave radar or static surface displacements detected by GNSS . The extent of the rupture can be chosen automatically and manually from well-established scaling relationships or from known geology. For a M7.5 earthquake a length of 80 km to 200 km can be expected. For a location on land neither the short nor the long rupture scenarios can explain the large wave heights at Palu. 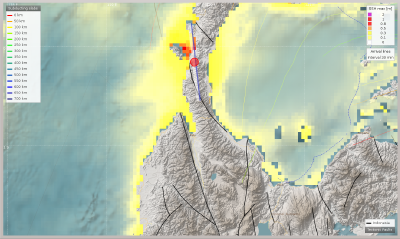 Tsunami runup simulation base on a short rupture 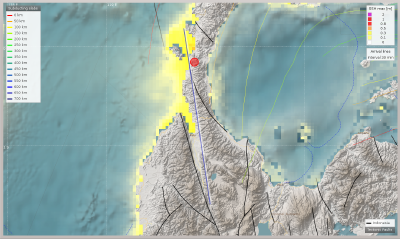 Tsunami runup simulation base on a rupture corresponding with the afteshocks.

We have used our SIGMA module to analyze and to simulate the ground motion due to the earthquake considering different GMPEs (Ground Motion Prediction Equations) and the observed source mechanism. The modeled seismic intensities and PGAs (Peak Ground Accelerations) explain the vast destruction of the area. 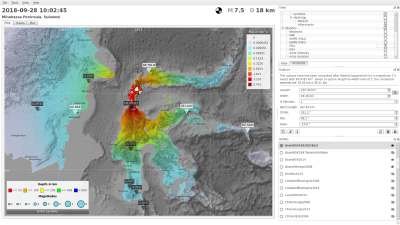 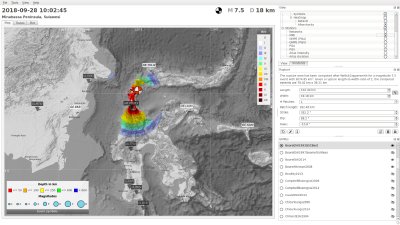 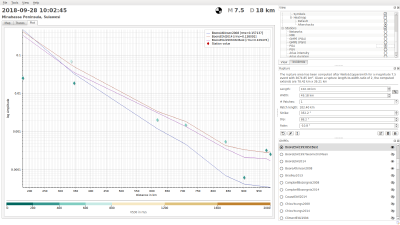 Aftershock heatmap in SIGMA from 4 hours after the event.